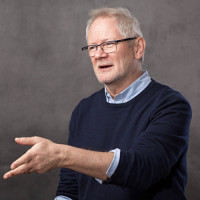 Simon Middleton is the founder of the Shackleton brand and a new menswear business, Blackshore. Simon left Shackleton in September 2016, supposedly with early retirement in mind, but got restless and dreamt up a new made-in-Britain menswear brand, called Blackshore. He is also the author of three books, including Build a Brand in 30 Days. Simon runs us through working with local manufacturers, and the importance of telling the story.