What Synthetic Materials Are Doing To Our Environment

What Synthetic Materials Are Doing To Our Environment

Over the last few decades there has been a major shift in the materials chosen by manufacturers, designers and consumers alike. Whereas natural fibres dominated the scene fifty years ago, we now see an abundance of synthetic and man-made materials taking centre stage. The industry is overrun with polyester, acrylic and nylon.

The reason behind this shift is no secret; synthetics are cheaper and easier to produce in large quantities. This may be good for the bottomline, but it is damaging the environment in a big way—contributing an overwhelming amount of chemicals, waste and carbon emissions. Are the benefits worth these dire consequences?

Forbes contributor James Conca cites that the clothing industry is responsible for a whopping 10% of all global emissions, being the second biggest industrial polluter worldwide. Though this accounts for all apparel manufacturing, not just synthetics, it gives an idea of the grand scale we are discussing.

The U.S. Energy Information Administration say that “plastics are made from liquid petroleum gases (LPG), natural gas liquids (NGL), and natural gas. LPG are by-products of petroleum refining and NGL are removed from natural gas before it enters transmission pipelines.”

I’d like to share a few more facts with you. In a single year, almost 70 million barrels of oil are used in the manufacturing of polyester alone. The crude oil is used both as a raw material and as fuel to generate the necessary energy used in the process.

Extraction of crude oil and gases is one of the most contentious environmental issues of our modern, growing and globalising world. As well as everyday pollution of the air and land, the oil industry spills tens of thousands of litres of crude oil every year, on land as well as the oil spills in the sea which devastate marine wildlife and pollute the part of our planet that sequesters the carbon emissions we produce.

In 1 year 70 million barrels of oil are used in the manufacturing of polyester - @OffsetWarehouse. #ecofabric #textiles #fossilfree

According to US Energy Information Administration, the four major nonrenewable energy sources are

Nonrenewable energy sources come out of the ground as liquids, gases and solids. We use crude oil to make liquid petroleum products such as gasoline, diesel fuel and heating oil. Propane and other hydrocarbon gas liquids, such as butane and ethane, are found in natural gas and crude oil. Natural gas is the raw material to make synthetic fibres, and along with coal and crude oil are all considered fossil fuels because they were formed from the buried remains of plants and animals that lived millions of years ago.

As we can see above, synthetic fabrics are made from natural gas, which is a nonrenewable resource - so once the raw material has been used, it can not be replaced. In 2013, global synthetic fibre production was estimated to be 55.8 million tons! When you put that into context of the number of synthetic garments that get sent to landfill every year, it's staggering. According to Newsweek, in less than 20 years the volume of clothing Americans throw away each year has doubled from seven million to 14 million tons, which is equivalent to an unbelievable 80 pounds per person. The EPA estimates that diverting all of those often-toxic trashed textiles into a recycling program would be the environmental equivalent of taking 7.3 million cars and their carbon dioxide emissions off the road. According to the United Nations Industrial Development Organization, each person worldwide contributes nearly 20 tonnes of harmful carbon dioxide emissions based purely on the production of clothing made from synthetic materials.

How Do You Find Oil?

Then there are the dangers of fracking, which many of you will be familiar with due to the fracking that has just started in Lancashire which was opposed time and again by local residents and authorities. The process of fracking involves millions of gallons of water, mixed with sand and chemicals (some known to cause cancer) being injected into the ground at a high pressure to fracture the rock and release gases. Claimed by fracking advocates to be a huge step towards energy security, as well as a low polluter (mainly because it isn't such an eyesore as mines and wind turbines are considered to be... which I'm not quite sure I understand) this process actually contaminates water sources; hardly a move towards resource security, especially when the pollution is all for the sake of a finite resource.

You also can't forget the effects on people of the fossil fuel industry. It's not just the effects of pollution; the oil industry also displaces communities from their homelands and heartlands. This isn't limited to a case of practical, physical displacement, but it is also the denial of communities' rights to their own heritage. In many cases these communities have had their homes, rights and cultures historically and brutally denied by previous races for resources by larger and more economically powerful forces. Just look at what's happening with the Dakota Pipeline.

It will interest some of you to know that the company who introduced nylon in 1939 were Dupont. The very same company that also more recently introduced Sorona, which I explored in my most recent interview post.

All that energy has to come from somewhere. The harvesting of petroleum and coal is often devastating to nearby habitats, particularly when carried out on such a large-scale.

Synthetic materials made from petrochemicals are not readily biodegradable, meaning the end result will always be long-term pollution. Unlike nylon, polyester is easy to recycle, reducing some of the waste accumulating in our landfills. Recycled polyester is produced to create more fashion. It also makes up a quarter of all the soda bottles circulating today. Nonetheless, a polyester and nylon blend can take up to 40 years to decompose if not discarded responsibly. 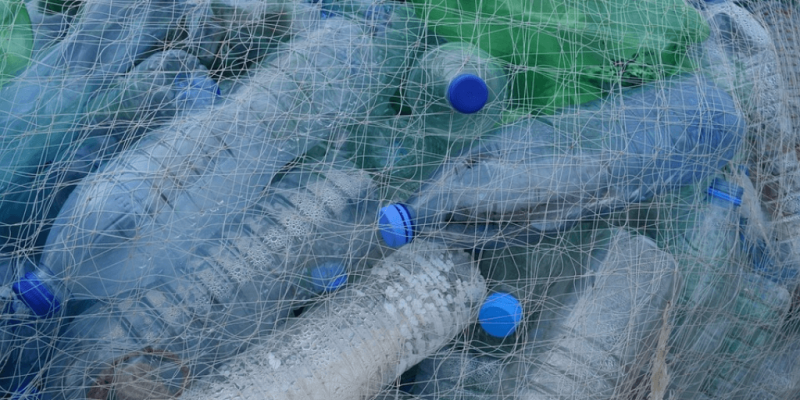 Water is essential to life and is naturally abundant on earth, though our existing sources are becoming more and more polluted every day. Polyester uses huge amounts of water in the final cooling process; the machinery used also requires lubricants that can seep into the supply. Surprisingly, nylon requires less water to produce than even natural materials, but it isn’t all good news. Synthetic materials still require large amounts of dyes (they do not take up colour as well as natural fibres) in order to obtain the desired colours, much of which goes down the drain and ultimately out to the ocean. Thus, the use of these strong dyes along with other harmful chemicals, including carcinogens, can create significant damage to the water and air.

Pollution Over There And Everywhere

Because the process is so toxic, manufacturing tends to take place overseas in places like China, Indonesia and Bangladesh. You can see this simply by checking the tags on polyester clothing. These locations are chosen in part due to the availability of cheap labour, but also in large part due to their lax environmental regulations. This leads to significant damage to local areas. There is an increasing alertness to the idea that this makes environmental issues as matter of social discrimination. However, pollutants rarely stay in one place. We can see the effects across the globe as the waste travels by air and water. The extent of the damage spreads worldwide.

The production of synthetic fibres exacerbates the destruction of our environment and can also create economic hardship, despite being inexpensive and abundant. The bottom line is obviously a concern for Capitalist classes, and so the polarity of economic stability is dire; all thanks to the fast fashion world depending on synthetic.

The best way to protect our environment and the health of our global community, is to lean towards natural fibres or synthetics that are produced more responsibly. To build a sustainable and more eco-friendly wardrobe or product line, avoid synthetic materials like polyester or nylon as much as possible. At the very least, opt for recycled polyesters, which is a very affordable place to start and a huge diverter from landfill.

Finally, I leave you with a word of advice: "Remember the bigger implications of your small, everyday choices". Zady’s CEO and cofounder Maxine Bédat said it best when she explained that, “The clothing we choose to wear everyday has an enormous impact on the planet and its people. Our clothing can either continue to be a major part of the problem, or it can be an enormous part of getting our planet on track. The choice is ultimately ours…”

If you found this post interesting please sign up for our newsletter! We’ll let you known about deals, news, events and new fabrics!

And we love to hear your comments on our articles – have we answered any questions you may have, or have we provoked new questions in you? Let us know, or, even better… sign up to our Meet-up group where we get together at masterclasses, shopping events, discussions and networking drinks evenings to share ideas, concerns, news and plans in the arena of sustainable and ethical textiles and design!

Interested in learning more about ethical textiles and how to use them in your fashion collection?

The Sustainable Fashion Collective brings you Masterclasses on specific fibre types. Each Masterclass contains lessons from guest experts, from brands to material innovators.

Ethical Fabrics And Why We Need To Use Them

The Environmental Impacts Of Washing And Laundry

Extending The Life Of Clothing And Textiles

Upcycling And The Circular Economy

>> Register, and upgrade as a Professional Member for full access. <<