How To Make Fabrics: The Basics

Did you know that textile manufacturing is one of the oldest human activities? The oldest known textiles date back to around 5000 B.C. But have you ever thought – really thought – about how to make fabrics?

How much fabric do you use in your life? For a start, there are all of the clothes that you wear. Then the linens on your bed. The carpet on your floors. The towels in your bathroom, and the tea towels in your kitchen. Now look at the curtains at your windows, and the seats in your car . . . It really is incredible just how much fabric we surround ourselves with on a day to day basis.

At a very basic level, you have to have raw material to make the fabric with – and there are three distinct groups: Natural, Animal By-Product, Man-made.

Firstly, you have natural materials that are from plants. It sounds bizarre, but if you think about it, cotton and linen are actually just by-products of things that grow from the ground. Similarly, we can create fabric from banana and bamboo and all sorts of other wonderful materials. Secondly, you have natural materials that we get from animals. Many people immediately think of leather and fur, but silk and wool are also a natural animal by-products. Lastly, there are man made materials that we can produce chemically, such as nylon and polyester. These are completely synthetic, and are derived from oil, a non-renewable resource. 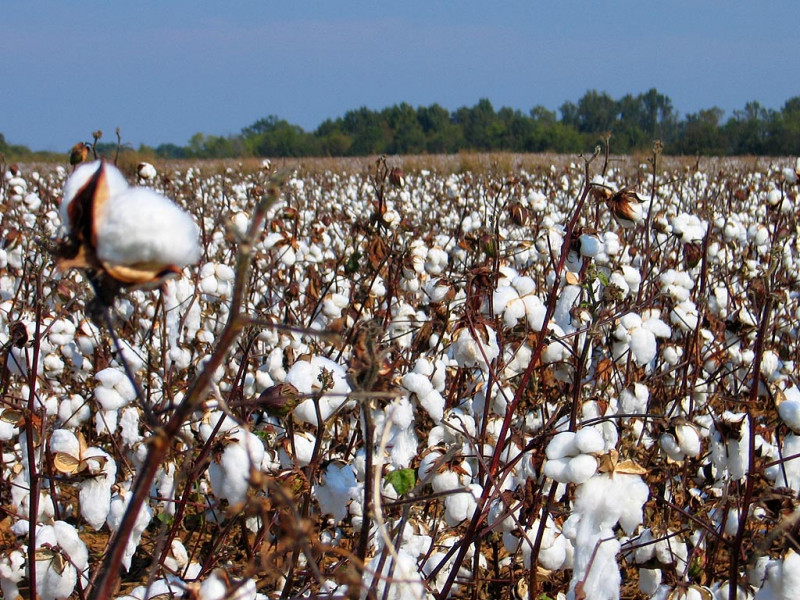 Once you have your raw material, you need to put an awful lot of effort into creating the actual fabric. This process will alter depending on the raw material that you start off with. Most of the natural materials will have fibres that can be broken down and twisted into long threads or yarns, this is called spinning.  Plants like cotton and linen, silk and even wool from sheep, are "spun" into these long threads which are then woven into the finished material. As the raw materials can be collected in all sorts of ways, there will almost certainly be seeds and bits of plant still attached, and it can even look a little dirty. So somewhere along the fabric making process the material is thoroughly cleaned and washed, so that it is beautiful and ready to be dyed different colours, and then made into clothes. Every part of the process, from the spinning, to the ply, to the thread count can have an effect on what the final fabric will look like. This is the beauty of weaving! For a more in depth look, have a browse of this weaving article.

As well as weaving the fibres into fabrics, you can also knot the fibres together. There are several methods of doing this: knitting and crocheting.

Knitted fabrics stretch easily in all directions, whereas woven fabrics only "give" a little on the bias (the diagonal of the fabric). Knitting can be done "flat" or "in the round". Flat knitting is done on a set of single point knitting needles, and the knitter goes back and forth, adding rows. In Circular knitting, or "knitting in the round", the knitter knits around in a continuous circle, creating a tube. A knitted object will unravel easily if the top has not been secured - a common nightmare for handknitters!

Crochet differs largely from knitting in that there is only one loop, not the multitude as knitting has. Instead of knitting needles you use a crochet hook.  The result looks similar to lace, but tends to be more chunky.

I thought I'd include lace, as although it may be crocheted or knitted, it is often used as a standalone term. A lace fabric is very similar in appearance to crochet but generally a much more lightweight openwork fabric, patterned, with open holes in the work. The holes can be formed via removal of threads or cloth from a previously woven fabric, but more often lace is built up from a single thread and the open spaces are created as part of the fabric.

Felt is made using fibres, but instead of spinning the fibres into long lengths that can be woven or knitted, they are matted or shrunk together. The result is a fabric that can be cut without fraying or degrading the edges. Felt can be made from all wool fibres and other animal fibres such as alpaca, cashmere, angora and even buffalo. The basic treatment is either by wet-felting the fibres using a felting solution or dry-felting using felting needles or an embellisher. The two methods make a very different fabric and you have to decide what the final outcome is to be to decide which method to use.

Dry-felting can be used to make three dimensional objects that need a firm structure or embellishing onto a felt textile. Wet-felting creates soft fabrics suitable for jewellery, hats, slippers, bags and murals. You can also combine the two methods, for example using dry-felted sheets to create pictures or decorations on loose fibres and then wet-felt the complete piece

Furs and leathers do not need to be spun or woven, as we use these materials in their original state.  But to simply use the hides without any washing, would be incredibly unhygienic and pretty smelly! These materials go through a very different process. Firstly, someone will make sure that there is absolutely nothing on the fur and leather that should not be there, such as ticks, or fleas or anything nasty like that! Then they are dried out so that the flesh side is not sticky. After that the fur can remain as it is, or the hair can be taken off and the rest be made into leather.

Humans have worn furs and leathers for thousands of years. In Figleafing through history: the dynamics of dress by Christie Harris and Moira Johnston, they talk about how early societies hunters believed in “contagious magic”: the transference of the strength, power, courage, skills, prowess and fertility of a particular animal to a human being. When a hunter tied a lion skin around his waist or flung it over his shoulder he believed that he would gain the strength of a lion.

Early attempts at man-made fibres began with a search for ‘artificial silk’, for which a patent was granted in England in 1855 to a Swiss chemist named Audemars. This fibre alchemist dissolved the fibrous inner bark of a mulberry tree (that rather fittingly feeds silk worms... but that's a confusing tangent!), and chemically modified it to produce cellulose. This substance was then formed into threads by dipping needles into the solution and drawing them out. It never occurred to him to emulate the silkworm by extruding the cellulose liquid through a small hole! Then in the early 1880s someone beat him to it: Sir Joseph W Swan, an English chemist and electrician.

Variations on this method were developed from this point all the way to the 1910s when the American Viscose Company formed by Samuel Courtaulds and Co Ltd began its production of Rayon. In 1939 DuPont began commercial production of nylon and by the 1950s man-mades were taking up 20% of the fibre needs of textile mills, with another new fibre called ‘Acrylic’ being added, an offshoot of nylon that had wool-like qualities.

At the same time, J T Dickson and J R Whinfield patented a Polyester fibre by condensation polymerisation of ethylene glycol with terephthalic acid which was promptly acquired by DuPont for the United States and Imperial Chemical Industries (ICI) for the rest of the world. By 1953 the majority of the 20th Century’s basic manufactured fibres had been discovered.

Polyester is "hydrophobic", it doesn’t absorb water, unlike nylon which is hydrophilic. Nylon may be stronger but its inability to repel water causes the fabric to swell and ultimately weakens the molecular structure. The dye used in nylon also oxidises in sunlight, which causes anything from fading to complete degradation (so why Armstrong planted a Nylon flag on the moon all those years ago, I don't know).

The better suitability of Polyester versus nylon for clothing has meant that it now dominates 54% of the textile market. So the industry’s engineers turned to refining their chemical and physical properties to extend their use across industry - leading to fibre advances such as three dimensional hollow-cored fibres, bullet-stopping Kevlar and fire and electricity proof Nomex.

To Conclude, Now You Know How To Make Fabrics

Clothes have, for thousands of years, been loved, shared and admired. We wear clothes to fit in with a particular group, or to show how wealthy we are, or what music groups we like, or how old we want everyone to think we are! Consequently, the fabrics that we clothe ourselves with are really important. The next time you shrug on a coat, or pull a jumper over your head, or look down at your leather sandals, you should think for a moment about all of the hard work that has gone in to creating that fabric, by people the world over – hard work that has gone on for thousands of years.