Understanding Weaving: What Are Looms?

Understanding Weaving: What Are Looms?

Let's start at the beginning. Cloth can be created by various methods: knitting, crochet, felting or weaving. Of all these, weaving is the oldest and most popular method of creating a fabric. Weaving has been practiced over thousands of years and over the years, both the process and the equipment used for it have grown in both complexity and efficiency. 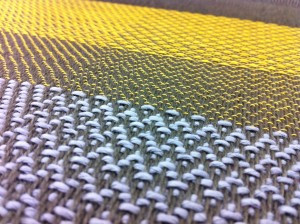 If you look closely at a woven fabric, you can see that the lines of interlaced yarn used in it run in perpendicular directions, creating a cross-like pattern. This is because the thread or yarn used in weaving is interwoven in two distinct directions, at right angles. The longitudinal thread that runs down the fabric is called the “warp”, while the lateral thread that runs across the width are called the “weft”.

Looms are the devices used to weave. They are what hold the longitudinal warp threads in place as the weaver weaves the "filling" or weft threads through them. The weaver can choose different colours to create specific patterns. They can also change the method of this weave to create different textures or patterns. 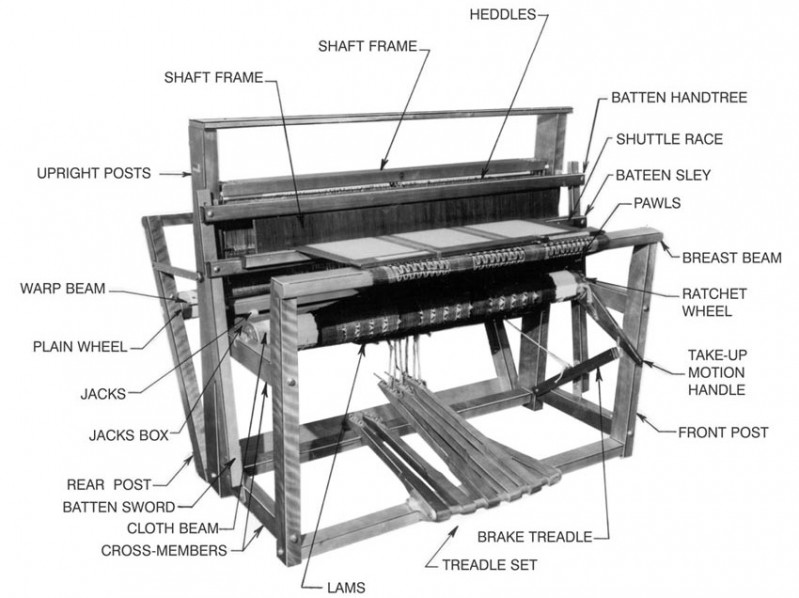 The Parts of A Loom

Are There Different Types of Loom?

Yes! And they all have different pros and cons, and also produce different characteristics in fabrics.  You know you're a pro when you can tell what fabric was made with what type of loom!

A power loom is a mechanised loom powered by a "line shaft" (a power driven rotating shaft). The first power loom was designed in 1784 by Edmund Cartwright and first built in 1785. It was refined over the next 47 years until a design by Kenworthy and Bullough made the operation completely automatic: the Lancashire Loom. This loom was the mainstay of the Lancashire cotton industry for a century.  By 1850 there were 260,000 in operation in England. Fifty years later came the Northrop Loom that would replenish the shuttle when it was empty and this replaced the Lancashire loom.  Within the "Power Loom" category, there are many productions, usually named after the designer - I won't go through all of them here, but they are all based on the following principles:

The first ever powered looms were shuttle type looms. Spools of weft are unraveled as the shuttle travels across the shed. This is very similar to projectile methods of weaving with the exception that the weft spool is stored on the shuttle. These looms are considered obsolete in modern industrial fabric manufacturing because these machines can only reach a maximum of 300 picks per minute.

An air jet loom uses short quick bursts of compressed air to propel the weft through the shed in order to complete the weave. Air jets are the fastest traditional method of weaving in modern manufacturing and they are able to achieve up to 1200 picks per minutes. However, the amounts of compressed air required to run these looms as well as the complexity in the way the air jets are positioned makes them more costly than other looms.

Water jet type looms use the same principle as air jet looms, however, they take advantage of pressurized water to propel the weft. The advantage of this type of weaving is that water power is cheaper where water is directly available on site. Picks per minute can reach as high as 1000.

This type of weaving is very versatile in that rapier looms can weave using a large variety of threads. There are several types of rapiers, however they all use a hook system attached to a rod or metal band to pass the pick across the shed. These machines regularly reach 700 picks per minute in normal production.

Projectile looms utilize an object that is propelled across the shed, usually by spring power, and is guided across the width of the cloth by a series of reeds. The projectile is then removed from the weft fibre and it is returned to the opposite side of the machine so it can get reused. Multiple projectiles are in use in order to increase the pick speed. Speeds max out on these machines at 1050 ppm.

A Dobby loom is a type of floor loom that controls all the warp threads using a device called a "dobby". The word dobby derives from "draw boy" - the weaver's helpers who used to control the warp thread by pulling on draw threads!  A dobby loom is an alternative to a treadle loom. Both are floor looms in which every warp thread on the loom is attached to a single shaft using the heddle (see the "parts" definition above!). Each shaft controls a set of threads. Raising or lowering several shafts at the same time gives a huge variety of possible sheds (gaps) through which the shuttle containing the weft thread can be thrown.

A manual dobby uses a chain of bars or lags each of which has pegs inserted to select the shafts to be moved. With a computer-assisted dobby loom the shafts are selected automatically by a computer program (via electricity!). Either way, the selected shafts are raised or lowered by either leg power on a dobby pedal or electric (or other power source)s.

Most eight-shaft floor looms have only ten to twelve treadles due to space limitations. This limits the weaver to ten to twelve distinct sheds. With a dobby loom, all 254 possibilities are available at any time. This vastly increases the number of cloth designs available to the weaver. The advantage of a dobby loom becomes even more pronounced on looms with 12 shafts (4094 possible sheds), 16 shafts (65,534 possible sheds), or more. It reaches its peak on a Jacquard loom in which each thread is individually controlled.

Another advantage to a dobby loom is the ability to handle much longer sequences in the pattern. A weaver working on a treadled loom must remember the entire sequence of treadlings that make up the pattern, and must keep track of where they are in the sequence at all times. Getting lost or making a mistake can ruin the cloth being woven. On a manual dobby the sequence that makes up the pattern is represented by the chain of dobby bars. The length of the sequence is limited by the length of the dobby chain. This can easily be several hundred dobby bars, although an average dobby chain will have approximately fifty bars.

A computer controlled dobby loom takes this one step further by replacing the mechanical dobby chain with computer controlled shaft selection. In addition to being able to handle sequences that are virtually unlimited, the construction of the shaft sequences is done on the computer screen rather than by building a mechanical dobby chain. This allows the weaver to load and switch weave drafts in seconds without even getting up from the loom. In addition, the design process performed on the computer provides the weaver with a more intuitive way to design fabric; seeing the pattern on a computer screen is easier than trying to visualize it by looking at the dobby chain.

Dobby looms expand a weaver's capabilities and remove some of the tedious work involved in designing and producing fabric. Many newer cloth design techniques such as network drafting can only reach their full potential on a dobby loom.

The Jacquard loom is a mechanical loom, invented by Joseph Marie Jacquard in 1801. It was designed to simplify the process of manufacturing textiles with complex patterns such as brocade, damask and matelasse. The loom is controlled by punched cards with punched holes, each row of which corresponds to one row of the design. Multiple rows of holes are punched on each card and the many cards that compose the design of the textile are strung together in order.

A Jacquard head could be attached to a power loom or a hand loom.

A circular loom is used to create a seamless tube of fabric for things like tights, sacks, t-shirts, fabrics, fire hoses and so on. Circular looms can be small "jigs" used for hand knitting or large high speed machines for modern garments.

One of my favourite looms! A backstrap loom is beautifully simple, and has been around since ancient civilisation!  It basically comprises of two sticks or bars, which the warp threads are stretched. One bar is attached to a fixed object, and the other to the weaver - usually with a strap around the weaver's back. The weaver leans back and uses his or her body weight to create tension.

It's possible to achieve both simple and complex designs with this type of loom. The width is limited to how far the weaver can reach from side to side to pass the shuttle - another rather twee characteristic, I think! You can usually find belts, ponchos, bags, hatbands and carrying clothes made using this technique.

The warp-weighted loom is a vertical loom that is said to have originated in the Neolithic period! It's defining characteristic is hanging weights (loom weights) which keep bundles of the warp threads taut. Frequently, extra warp thread is wound around the weights. When a weaver has reached the bottom of the available warp, the completed section can be rolled around the top beam, and additional lengths of warp threads can be unwound from the weights to continue. This frees the weaver from any vertical size constraints.

Very simply: fabric that is freshly off the loom, woven but unfinished. You'll hear these terms a lot in design, so it's good to familiarise yourself with them! 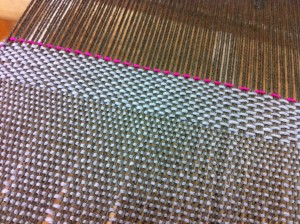 Weaving can be used to create plain weave fabrics, twill weave designs, satin weaves, complex interlacing or even pile fabrics like velvets. The beauty of the variety in looms is that each machine gives wings to the imagination of the weaver. These manifest as captivating designs on cloth that cannot be created by any other method with equal finesse or quality.