Flower Fashion Through The Ages

Flower Fashion Through The Ages

There are few women in this world who can resist the charm of flowers. Flowers have always been a symbol of beauty, and women, irrespective of age or origin are enraptured by their very presence. As you know, I'm constantly instagramming the latest peony in bloom. It's difficult to verbalise why I find so much joy in gazing at pretty blossoms - but I don't think I'm alone in that!

With the new season hailing a floral frenzy, I started wondering when floral patterns first found their way into fabrics and fashion, and how they've developed over the years.

The Origins Of Floral Fashion: Peonies In Asia

Floral prints are believed to have originated in the East. They then travelled to the west from the Orient and Asia. The first traders from the East brought beautiful silks printed with exotic flower designs and sold them at very high prices. These ornate silks were very expensive and only the rich in Europe could afford them at the time. 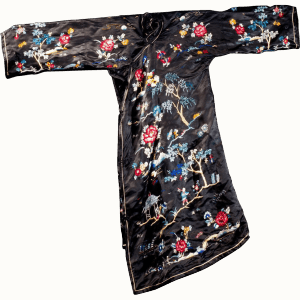 Peonies, which are a unique flower of China (and also my favourite flower!), were one of the first popular prints on silk. These flowers have large brightly coloured petals and beautiful shapes. They were depicted either by themselves, or sometimes with motifs of birds to form vibrant designs. You can read more about these prints and the significance of peonies in Chinese culture here.

With hundreds of designs and colours to choose from, the options to incorporate flowers into fabric are endless. But it's important to remember, that it's only really been in recent years that there has been global access to such an array of flowers. Before the peony print came to the West, no one had even seen the flower before!

Floral silks, which were the fashion statement during the Tang dynasty period 618–907 AD in China, had takers in the western world too. They grew in popularity in the west in the 19th century (a thousand years later!), when flower prints from China and Japan thronged the Western fashion scene. By this time, manufacturers in the west began to copy these floral fabrics and cheaper versions were soon made available to the public. 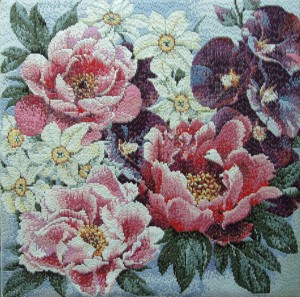 Floral lace was used to decorate garments in the middle ages (the 15th century). Lace was born from the desire to elaborate the edges of plain fabrics, whether of linen or heavier material. People wanted to get away from the harsh simplicity of the times. Venetian laces and cut-work with elaborate floral forms were greatly accepted by ladies and gentlemen and over time were also used by the common people in the late 16th century. This is mentioned in detail on “A Lace Lover's Diary”.

"Venice guarded the secret of her methods with jealous care, and it was many years before the world was made familiar with the manner in which the exquisite floral designs, with their wealth of minor adornments, were worked out. Thus Italy was able to lay tribute upon the entire civilized world, and her coffers were enriched to overflowing from the receipts of the sales of lace to eastern, central and northern Europe."

Floral designs also made appearances in heavy ornate textiles from Persia during the Islamic Period (early 17th century). Cloth embellished with tulips alongside pomegranates and vines were a favourite in the 17th century with elaborate designs woven in velvet. These Persian floral fabrics were brought to Italy by the merchants from the Ottoman Empire.

Another popular type of floral fabric that we come across in history is Chintz. Chintz-cottons, characterised by multicoloured block printed flowery patterns on a shiny base material, were introduced to Europe in the 17th century. British and Dutch merchants brought rolls of this fabric from India and reaped huge profits from the sale. The manufacturing process of these pretty designs were a mystery to Britain at the time. The production method was ultimately figured out by British textile designers in 1759, and with the industrial revolution in the 19th century chintz's were mass-produced at economic prices.

European flowers like daisies, carnations and roses were used to decorate fashionable silk brocades in the 18th century. A look at the trends in this century reveals that most of the printed cottons used during this era involved floral prints. While twisting stems and brightly coloured flowers were popular in the 1780s, the preference was for smaller sprig designs and tiny blossoms in the 1790s.

After the Victorian age (1832 onward), one flower that was depicted in fabric and art was the sunflower (another favourite). William Morris, the visionary poet and thinker brought this simple but elegant flower into the limelight. Consequently, the sunflower was incorporated into wallpaper, tiles, and even fabric.

Floral fashion continued to inspire textile designers throughout the twentieth century, to today.

The classic floral subject has been incorporated not only into apparel, but also headgear and footwear. It’s harder to single out specific flower moments for the 20th century - a reflection of an ever-increasing globalisation and an accelerating pace of change. While we've seen big trends come and go, such as the "Flower Power" 60s, even to 2014's floral leggings - flower prints have always been in production. And we can't forget the dramatic interpretations of flowers and spectacular fashion shows. Lingerie is one area of fashion where floral prints are almost indispensable. Ornate floral details add a seductive touch to inner wear and are favoured by women everywhere.

I find the history of the use of flowers within fashion design fascinating. It is quite remarkable that something could have transcended so many thousands of years and still be fashionable today. I love how the representation of the flower has evolved as our fashions have changed and as manufacturing has progressed. Fifty years from now, we will have seen more examples of flowers within fashion that would not have been possible today. Advances in manufacturing capabilities and what is culturally and socially acceptable will see another evolution of floral design - which is incredibly exciting!

As long as there are flowers, designers will continue to be inspired by these stunning products of nature. Be it spring or summer, floral fashion is evidently a timeless trend and will always be in style. If you like these articles, then please do sign up to a monthly roundup, by adding your email address to the "Insider Designer Knowledge" box.